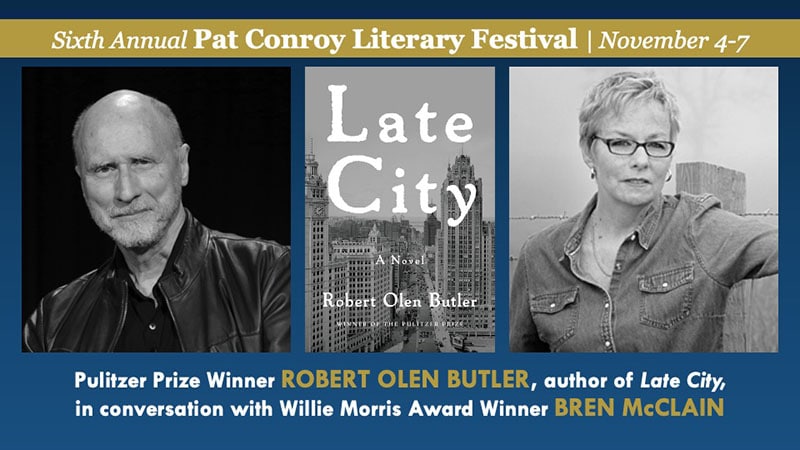 Presented as part of the 6th annual Pat Conroy Literary Festival, join Robert Olen Butler for a discussion of his new novel, Late City, in conversation with Bren McClain, author of One Good Mama Bone. This free virtual event will be live-streamed on the festival Facebook page and also projected for in-person attendees at the Technical College of the Lowcountry auditorium (104 Reynolds St, bldg 12, Beaufort). The authors will be presenting virtually, but books will be available for sale at TCL through NeverMore Books.

“With two dozen remarkably imaginative and empathic fiction titles to his credit, Butler brings preternatural attunement to the spiraling of the mind and ardently honed artistry to this exceptionally nuanced, tender, funny, tragic, and utterly transfixing portrait of a man reflecting on more than a century’s worth of horror and wonder.”—Booklist, starred review

“A moving tape of love and misunderstanding.”—Publishers Weekly

“It’s God, the supercilious wit who rules the center of Late City… While it has a consistently subtle profundity, Late City isn’t exactly a Novel of Ideas — it’s too entertaining and accessible for that, especially with jagged bolts of wry comedy dispensed by God.”—Atlanta Journal-Constitution

“An engaging read and a commendable quest into the underpinnings of the complicated, often contradictory American people. More crucially, the novel is a poignant meditation on the circle of life, the wonder we all feel as it slips away.”—Minneapolis Star Tribune

“In other novels, notably Perfume River, Butler explores the devastation that war inflicts on individuals. With Late City, he focuses instead on the inner life of one fallible, lovable, redeemable man over 12 tumultuous decades, a soul forever striving to be a right guy.”—Chapter 16

A 115-year-old man lies on his deathbed as the 2016 election results arrive, and revisits his life in this moving story of love, fatherhood, and the American century from Pulitzer Prize winner Robert Olen Butler.

A visionary and poignant novel centered around former newspaperman Sam Cunningham as he prepares to die, Late City covers much of the early twentieth century, unfurling as a conversation between the dying man and a surprising God. As the two review Sam’s life, from his childhood in the American South and his time in the French trenches during World War I to his fledgling newspaper career in Chicago in the Roaring Twenties and the decades that follow, snippets of history are brought sharply into focus.

Sam grows up in Louisiana, with a harsh father, who he comes to resent both for his physical abuse and for what Sam eventually perceives as his flawed morality. Eager to escape and prove himself, Sam enlists in the army as a sniper while still underage. The hardness his father instilled in him helps him make it out of World War I alive, but, as he recounts these tales on his deathbed, we come to realize that it also prevents him from contending with the emotional wounds of war. Back in the U.S., Sam moves to Chicago to begin a career as a newspaperman that will bring him close to all the major historical turns of the twentieth century. There he meets his wife and has a son, whose fate counters Sam’s at almost every turn.

As he contemplates his relationships—with his parents, his brothers in arms, his wife, his editor, and most importantly, his son—Sam is amazed at what he still has left to learn about himself after all these years in this heart-rending novel from the Pulitzer Prize winner. 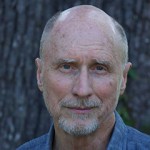 Robert Olen Butler is the Pulitzer Prize-winning author of eighteen previous novels, including Hell, A Small Hotel, and Perfume River. His newest novel, Late City, is forthcoming in September 2021. He is also the author of six short story collections and a book on the creative process, From Where You Dream. He has twice won a National Magazine Award in Fiction and received the 2013 F. Scott Fitzgerald Award for Outstanding Achievement in American Literature. He teaches creative writing at Florida State University. www.robertolenbutler.com 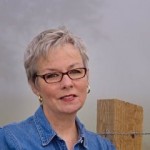 Bren McClain’s critically acclaimed debut novel, One Good Mama Bone, from Pat Conroy’s Story River Books won the 2017 Willie Morris Award for Southern Fiction and the 2018 Patricia Winn Award for Southern Literature. It was also named Pulpwood Queen 2017 Book of the Year, a 2017 Great Group Reads by the Women’s National Book Association, a Southeastern Independent Booksellers Association (SIBA) Okra pick, longlisted for SIBA’s Southern Book Prize and a finalist for the 2018 Crook’s Corner Prize. Most recently, the French translation (retitled Mama Red) was selected for the 2021 Prix Maya, an award given for France’s best animal novel. Bren also is a contributing essayist in Our Prince of Scribes: Writers Remember Pat Conroy. You can find Bren now with butt in chair, working on her next novel, which has already received acclaim, the gold medal for the William Faulkner Novel-in-Progress. Bren hails from upstate South Carolina, Anderson, where her novel is set. www.brenmcclain.com.