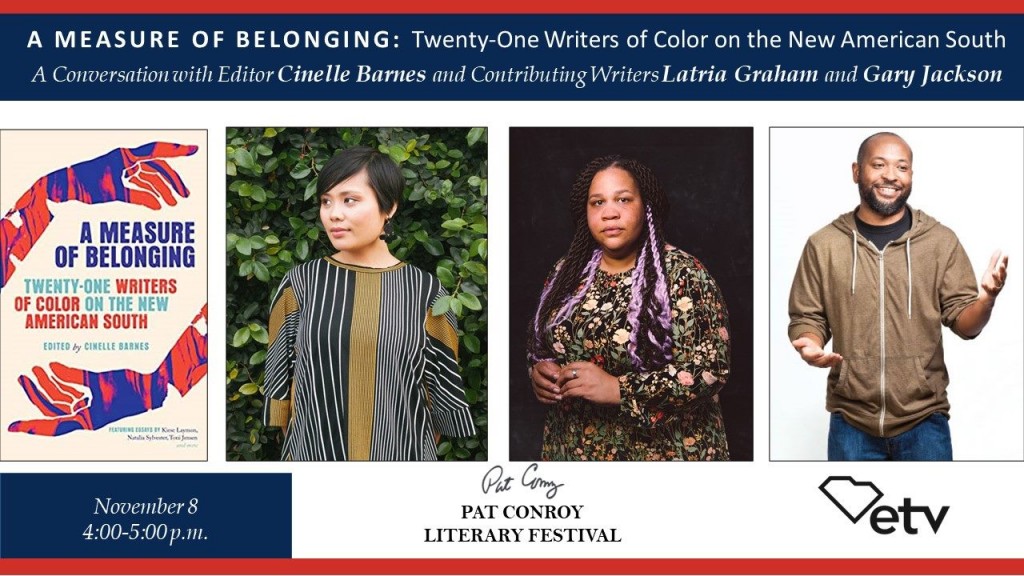 “The South on exhibit here does feel new: polygot, multiracial, small-c catholic, urbanized, unwilling to accommodate or overlook the past but instead primed to confront it head-on, and keen to sift the South’s virtues–lovingly–from its flaws.” –Garden & Gun

“Sharp and witty, this collection shows that there are many different ways to live, breathe, thrive and be a person who belongs in the South.” –Bookpage, starred review

Join us for a panel discussion of A Measure of Belonging: Twenty-One Writers of Color on the New American South, a newly named New York Times Notable Book–featuring editor Cinelle Barnes and contributing essayists Latria Graham and Gary Jackson–introduced by Ellen Malphrus.

About A Measure of Belonging

Assembled by editor and essayist Cinelle Barnes, essays in A Measure of Belonging acknowledge that from the DMV to the college basketball court to doctors’ offices, there are no shortage of places of tension in the American South. Urgent, necessary, funny, and poignant, these essays from new and established voices confront the complexities of the South’s relationship with race, uncovering the particular difficulties and profound joys of being a Southerner in the 21st century.

This collection celebrates the incredible diversity in the contemporary South by featuring essays by twenty-one of the finest young writers of color living and working in the region today, who all address a central question: Who is welcome?

Cinelle Barnes is a memoirist, essayist, and educator from Manila, Philippines, and is the author of Monsoon Mansion: A Memoir and Malaya: Essays on Freedom, and the editor of A Measure of Belonging: Twenty-one Writers of Color on the New American South. She earned an MFA in Creative Nonfiction from Converse College. Her writing has appeared in Buzzfeed Reader, Catapult, Literary Hub, Hyphen, Panorama: A Journal of Intelligent Travel, and South 85, among others. Her work has received fellowships and grants from VONA, Kundiman, the John and Susan Bennett Memorial Arts Fund, and the Lowcountry Quarterly Arts Grant. Her debut memoir was listed as a Best Nonfiction Book of 2018 by Bustle and nominated for the 2018 Reading Women Nonfiction Award. Barnes was a WILLA: Women Writing the American West Awards screener and a 2018-19 Scholastic Art & Writing Awards juror, and is the 2018-19 writer-in-residence at the Halsey Institute of Contemporary Art in Charleston, SC, where she and her family live. Learn more at www.cinellebarnes.com.

Latria Graham is a journalist and fifth generation South Carolina farmer. Her work stands at the intersection of food, social justice, sports and culture. She’s written longform pieces about everything from farming to NASCAR. She is a graduate of Dartmouth College, and later earned her MFA in Creative Nonfiction from The New School in New York City. She is a three-time Best American Sports Writing notable for her stories on athletes in places of tension—primarily Standing Rock, ND, and Flint, MI. She received a Bronze level CASE Award for her reporting on immigration policy that stemmed from 2017’s Executive Order 13769, often referred to as the “travel ban.” Her work has been featured in the NYT, LATimes, The Guardian, espnW, Southern Living, and Garden & Gun. She is also a contributing essayist to A Measure of Belonging: 21 Writers of Color on the New American South. Learn more at LatriaGraham.com.

Born and raised in Topeka, Kansas, Gary Jackson is the author of the poetry collection Missing You, Metropolis, which received the 2009 Cave Canem Poetry Prize. His poems have appeared in numerous journals including Callaloo, Tin House, Los Angeles Review of Books, Crab Orchard Review, and he’s been published in Shattered: The Asian American Comics Anthology. He was featured in the 2013 New American Poetry Series by the Poetry Society of America and is the recipient of both a Cave Canem and Bread Loaf fellowship. Jackson is a contributing essayist to A Measure of Belonging: Twenty-one Writers of Color on the New American South. He joined the Department of English at the College of Charleston in 2013, currently teaches in the MFA program as well as undergraduate creative writing, and is the associate poetry editor at Crazyhorse.