Pat Conroy Festival: Before We Were Writers Panel Discussion 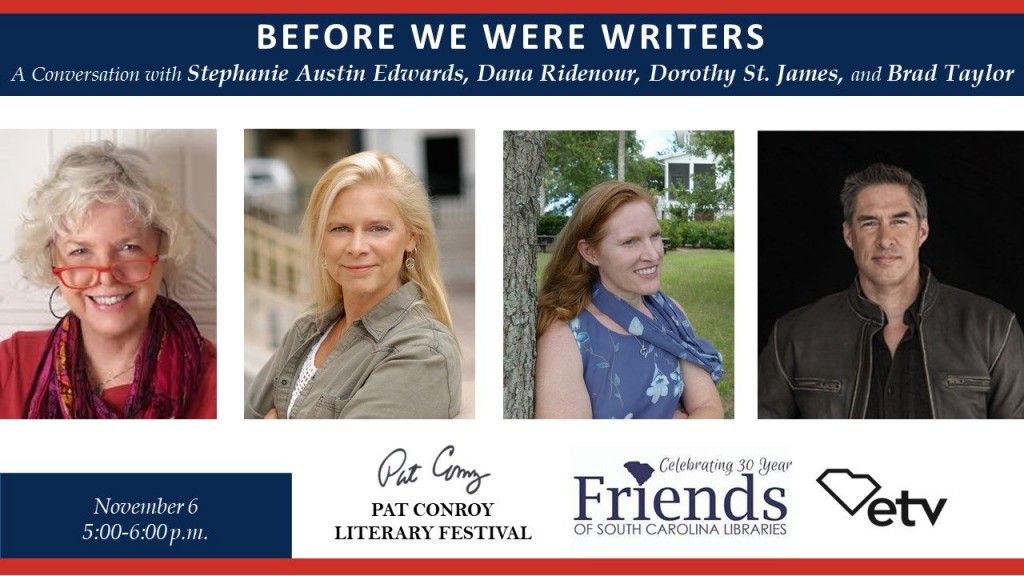 Broadway dancer. Undercover FBI agent. Urban planner. U.S. Army Special Forces officer. This group of novelists lived interesting lives before deciding to pursue their dreams of becoming fulltime writers. In this Pat Conroy Literary Festival panel discussion, we’ll talk to them about the leaps of faith that led them into their literary lives and how their former careers do (or don’t) impact their writing. Featuring Stephanie Austin Edwards (moderator), Dana Ridneour, Dorothy St. James, and Brad Taylor, this event will be live-streamed from the ETV Lowcountry Studio in Beaufort, SC.

Before Stephanie Austin Edwards returned to the Lowcountry of South Carolina, and to her love of writing, she had a twenty-two-year career in New York theater, film, and television. Stephanie now writes fiction and non-fiction, facilitates writers groups, teaches writing workshops, and consults with authors. Her debut novel, What We Set in Motion, won a Best Submission Award at the Atlanta Writer’s Club Conference. She is also a contributing writer to Our Prince of Scribes, an award-winning anthology about her high school friend and classmate, Pat Conroy, and a contributing writer to Short Story America VI. At the Pat Conroy Literary Center, Stephanie volunteers, leads writing workshops, and co-chairs the twice-monthly meetings of the Lowcountry Writers Group, a chapter of the South Carolina Writers Association. She lives and writes in nearby Port Royal.

Dana Ridenour is an award-winning author and retired FBI Special Agent. During her twenty-year career she was assigned to four different FBI Field Divisions and had the opportunity to work a wide variety of cases to include multi-faceted narcotics investigations, domestic sex trafficking of minors, and violent crime. She spent most of her career as an FBI undercover operative. Dana’s first novel, Behind The Mask, won numerous literary awards and was named one of the Best Indie Books of 2016 by Kirkus Reviews. Her second novel, Beyond The Cabin received the 2018 Royal Palm Literary Award for Best Thriller or Suspense Novel. Below The Radar was released on August 13, 2019 and received the Hal Bernard Award for Best Novel presented by the Southeastern Writers Association.

Dorothy St. James, known for the White House Gardener Mystery series and Southern Chocolate Shop Mystery series, is writing about her first love—books. The Beloved Bookroom Mysteries combine her love of libraries, small town Southern charm, and a heaping helping of intrigue. Dorothy was raised in the South and currently lives in Charleston, South Carolina within shouting distance of her neighborhood library, a dream come true.

New York Times bestselling novelist Brad Taylor was born on Okinawa, Japan, but grew up on 40-acres in rural Texas. Graduating from the University of Texas, he was commissioned as a second lieutenant in the U.S. Army Infantry. Brad served for more than 21 years, retiring as a Special Forces Lieutenant Colonel. During that time he held numerous Infantry and Special Forces positions, including eight years in 1st Special Forces Operational Detachment – Delta where he commanded multiple troops and a squadron. He has conducted operations in support of US national interests in Iraq, Afghanistan, and other classified locations. In 2011, Brad published his debut novel, One Rough Man, which was an immediate success and launched the Pike Logan series. Now with more than 13 installments and more than 2 million copies sold, the series has consistently hit the New York Times bestseller list. He lives in Charleston, SC with his wife and two daughters.