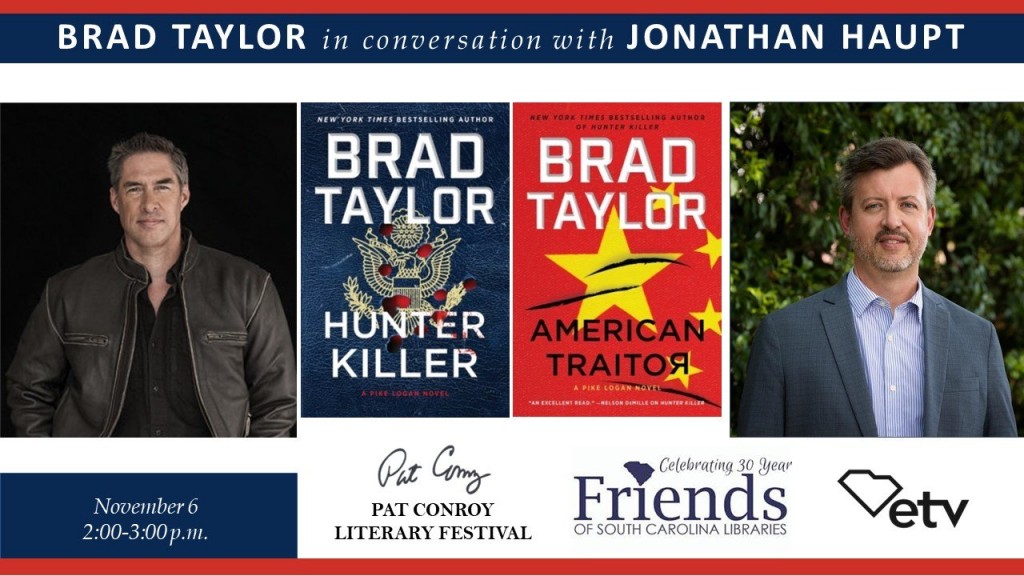 “A master of special-ops thrillers.” ~Booklist

Brad Taylor, New York Times best-selling author of the Pike Logan thriller series, will discuss his life of writing and service in conversation with Conroy Center executive director Jonathan Haupt. This Pat Conroy Literary Festival special event is presented in partnership with the Friends of South Carolina Libraries annual conference and will be live-streamed from the ETV Lowcountry studio in Beaufort, SC–home of the TELLY Award-winning author interview series By the River.

New York Times bestselling novelist Brad Taylor was born on Okinawa, Japan, but grew up on 40-acres in rural Texas. Graduating from the University of Texas, he was commissioned as a second lieutenant in the U.S. Army Infantry. Brad served for more than 21 years, retiring as a Special Forces Lieutenant Colonel. During that time he held numerous Infantry and Special Forces positions, including eight years in 1st Special Forces Operational Detachment – Delta where he commanded multiple troops and a squadron. He has conducted operations in support of US national interests in Iraq, Afghanistan, and other classified locations.

His final assignment was as an assistant professor of military science at The Citadel in Charleston, SC. He holds a Master’s of Science in Defense Analysis from the Naval Postgraduate School, with a concentration in Irregular Warfare. In 2011, Brad published his debut novel, One Rough Man, which was an immediate success and launched the Pike Logan series. Now with more than 13 installments and more than 2 million copies sold, the series has consistently hit the New York Times bestseller list. When not writing, he serves as a security consultant on asymmetric threats for various agencies. He lives in Charleston, SC with his wife and two daughters.
Learn more at https://bradtaylorbooks.com.