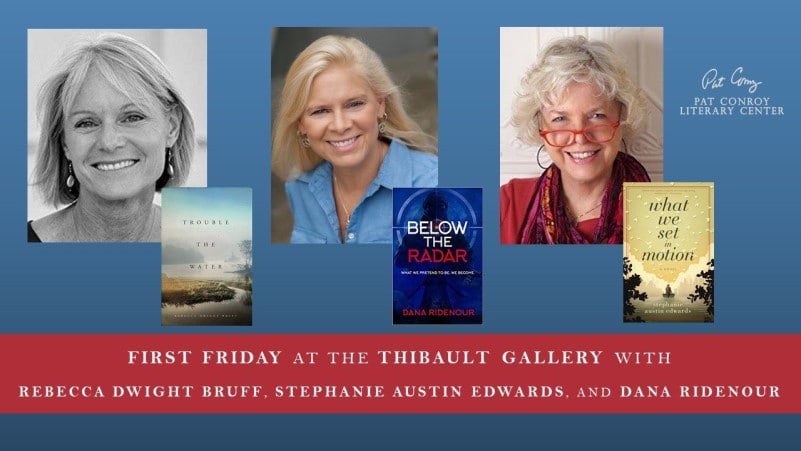 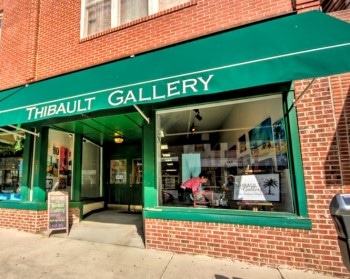 FIRST FRIDAY AT THE THIBAULT GALLERY WILL FEATURE
Rebecca Dwight Bruff earned her bachelor’s degree in education (Texas A&M) and master and doctorate degrees in theology (Southern Methodist University). In 2017, she was a scholarship recipient for the prestigious Key West Literary Seminar. She volunteers at the Pat Conroy Literary Center in Beaufort. She’s published non-fiction, plays a little tennis, travels when she can, and loves life in the lowcountry with her husband and an exuberant golden retriever. Trouble the Water is her first novel. https://rebeccabruff.com

Before Stephanie Austin Edwards returned to the Lowcountry of South Carolina, and to her love of writing, she had a twenty-two-year career in New York Theater. She now writes fiction and non-fiction, facilitates writers groups, teaches writing workshops, and consults with authors. She is the author of the award-winning novel What We Set in Motion and a contributing writer to Our Prince of Scribes, an anthology about her high school friend, Pat Conroy, and has contributed stories to Short Story America VI. Edwards is honored to be part of forwarding the mission of the Pat Conroy Literary Center, where she volunteers and leads writing workshops. www.stephanieaustinedwards.com

Dana Ridenour is an award-winning author and retired FBI Special Agent. During her twenty-year career she was assigned to four different FBI Field Divisions and had the opportunity to work a wide variety of cases to include multi-faceted narcotics investigations, domestic sex trafficking of minors, and violent crime. She spent most of her career as an FBI undercover operative. Dana’s first novel, Behind the Mask, won numerous literary awards and was named one of the Best Indie Books of 2016. Her second novel, Beyond the Cabin received the 2018 Royal Palm Literary Award for Best Thriller or Suspense Novel. Ridenour latest book, Below the Radar is scheduled for release on August 13, 2019. www.danaridenour.net