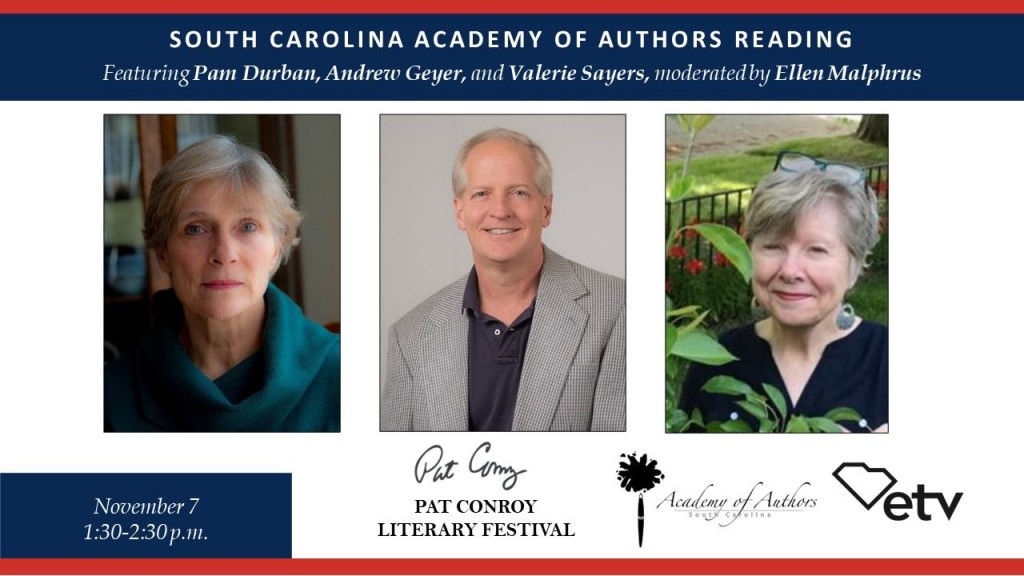 Join us for a virtual reading with fiction writers Pam Durban, Andrew Geyer, and Valerie Sayers–all inductees into the South Carolina Academy of Authors, the Palmetto State’s Literary Hall of Fame.–moderated by Ellen Malphrus. This Pat Conroy Literary Festival program will be live-streamed on Zoom and on the festival’s Facebook page.

Learn more about the South Carolina Academy of Authors at www.scacademyofauthors.com.

A 2020 inductee into the South Carolina Academy of Authors, Pam Durban is the author of two short story collections, Soon and All Set About with Fever Trees, and three novels, The Laughing Place, So Far Back, and The Tree of Forgetfulness. Her fiction and non-fiction has been published in many magazines and anthologies, including The Best American Short Stories of the Century, edited by John Updike, and The Pushcart Prize. She is a recipient of a National Endowment for the Arts Creative Writing Fellowship and a Whiting Writer’s Award. Her novel, So Far Back, was the winner of the 2001 Lillian Smith Award for Fiction.

Born and raised in Topeka, Kansas, Gary Jackson is the author of the poetry collection Missing You, Metropolis, which received the 2009 Cave Canem Poetry Prize. His poems have appeared in numerous journals including Callaloo, Tin House, Los Angeles Review of Books, Crab Orchard Review, and he’s been published in Shattered: The Asian American Comics Anthology. He was featured in the 2013 New American Poetry Series by the Poetry Society of America and is the recipient of both a Cave Canem and Bread Loaf fellowship. Jackson is a contributing essayist to A Measure of Belonging: Twenty-one Writers of Color on the New American South. He joined the Department of English at the College of Charleston in 2013, currently teaches in the MFA program as well as undergraduate creative writing, and is the associate poetry editor at Crazyhorse.

Andrew Geyer is a 2020 inductee into the South Carolina Academy of Authors. His ninth book, the story cycle Lesser Mountains, won a 2020 Independent Publisher Book Award for U.S. South – Best Regional Fiction. His other individually authored books are Dixie Fish, a novel; Siren Songs from the Heart of Austin, a story cycle; Meeting the Dead, a novel; and Whispers in Dust and Bone, a story cycle that won the silver medal for short fiction in the Foreword Magazine Book of the Year Awards and a Spur Award for short fiction from the Western Writers of America.

He is the co-author, with Jerry Craven and Terry Dalrymple, of the hybrid story cycle Dancing on Barbed Wire. Geyer also co-authored Parallel Hours, an alternative history/sci fi novel; and Texas 5X5, another hybrid story cycle from which one of his stories won a second Spur Award for short fiction. He co-edited the composite anthology A Shared Voice with Tom Mack. A member of the Texas Institute of Letters, Geyer currently serves as English Department Chair at the University of South Carolina Aiken and Fiction Editor for Concho River Review.

Beaufort native Valerie Sayers is the author of a collection of stories, The Age of Infidelity, and six novels, including her most recent, The Powers. Who Do You Love and Brain Fever were both named New York Times Notable Books of the Year, and a film, Due East, was based on her novels Due East and How I Got Him Back. Sayers’s stories, essays, and reviews have appeared widely, in such publications as the New York Times, Washington Post, Commonweal, Zoetrope, and Ploughshares, and have been cited in Best American Short Stories and Best American Essays. Her literary prizes include a National Endowment for the Arts literature fellowship and two Pushcart Prizes for fiction. She was inducted into the South Carolina Academy of Authors in 2018.