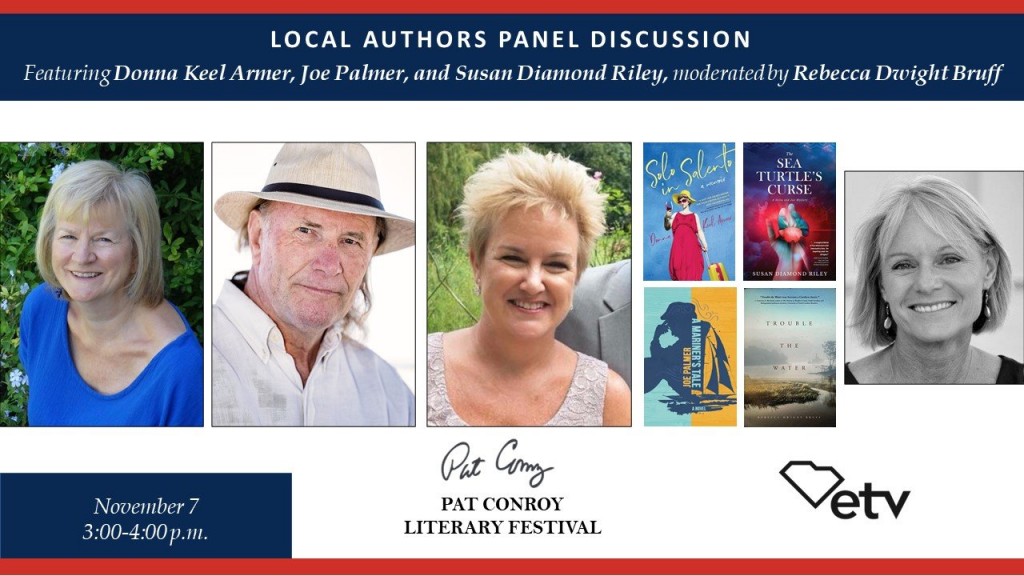 Join us for a local(ish) author panel discussion featuring four authors of recently published new small press books: Rebecca Dwight Bruff, author of the historical novel Trouble the Water (moderator); Donna Keel Armer, author of the travel memoir Solo in Salento; Susan Diamond Riley, author of the YA novel The Sea Turtle’s Curse; and, from farther off, special guest Joe Palmer, author of the debut novel A Mariner’s Tale. This Pat Conroy Literary Festival program will be live-streamed from the ETV Lowcountry Studio in Beaufort, SC, accessible on Zoom or the festival’s Facebook page.

Donna Keel Armer has traveled extensively in North America, Europe, and Africa. But it was on her first trip to Italy that she fell in love with a country and its people. It became her heart place and she made it her mission to return as often as possible. Solo in Salento: A Memoir tells the story of her sojourn in Otranto, Italy. Donna has published numerous articles and photographs on travel, food, human interest, and home and garden in South Carolina magazines. She also teamed up with the Sons of Italy in Columbia, SC, to produce Bella Cucina Italiana, a cookbook featuring her photography. She and her husband Ray live in beautiful Beaufort, SC where she loves volunteering at the Pat Conroy Literary Center and Hunting Island State Park. Learn more at https://donnaarmer.com.

Joe Palmer is an award-winning former newspaper reporter and longtime columnist, whose folksy column, Cup of Joe, ran for ten years in the Fernandina Beach News-Leader with a large and enthusiastic following. He’s written investigative reporting and feature stories for the Bradenton Herald, Macon Telegraph and News and the Florida Times-Union. A Navy veteran and medical corpsman, he went on to work as a surgeon’s assistant at St. Vincent’s Medical in Jacksonville, while attending college for this BA from the University of North Florida. He parlayed his investigative experience into a twenty-year career as an investigator for the Federal Public Defender’s Office. A sailor, he got the idea for his debut novel while working on an antique sailboat that he and his wife painstakingly restored. A Mariner’s Tale is his first novel. Learn more at www.joepalmerauthor.com.

Author of the Delta and Jax mysteries, The Sea Island’s Secret and The Sea Turtle’s Curse, Susan Diamond Riley is an award-winning author and editor. She has worked in the fields of publishing, journalism, and education for more than 30 years, and has taught and tutored writing at the middle-school, high-school, and college levels. She holds a master of arts degree in children’s literature, and she is a member of the Society of Children’s Book Writers & Illustrators, the South Carolina Writers Association, and the Island Writers Network. Learn more at www.susandiamondriley.com

Rebecca Dwight Bruff heard the story of Robert Smalls on her first visit to South Carolina. She was so captivated that she left her job and moved across the country to research and write this novel. Bruff earned her bachelor’s degree in education at Texas A&M and a master’s and doctorate in theology at Southern Methodist University. In 2017, she was a scholarship recipient for the prestigious Key West Literary Seminar. She volunteers at the Pat Conroy Literary Center in Beaufort, South Carolina. She’s published non-fiction, plays a little tennis, travels when she can, and loves life in the lowcountry with her husband and an exuberant golden retriever. Learn more at https://rebeccabruff.com.