Pat Conroy Festival: We the People: Mary Whyte in Conversation with Holly Jackson 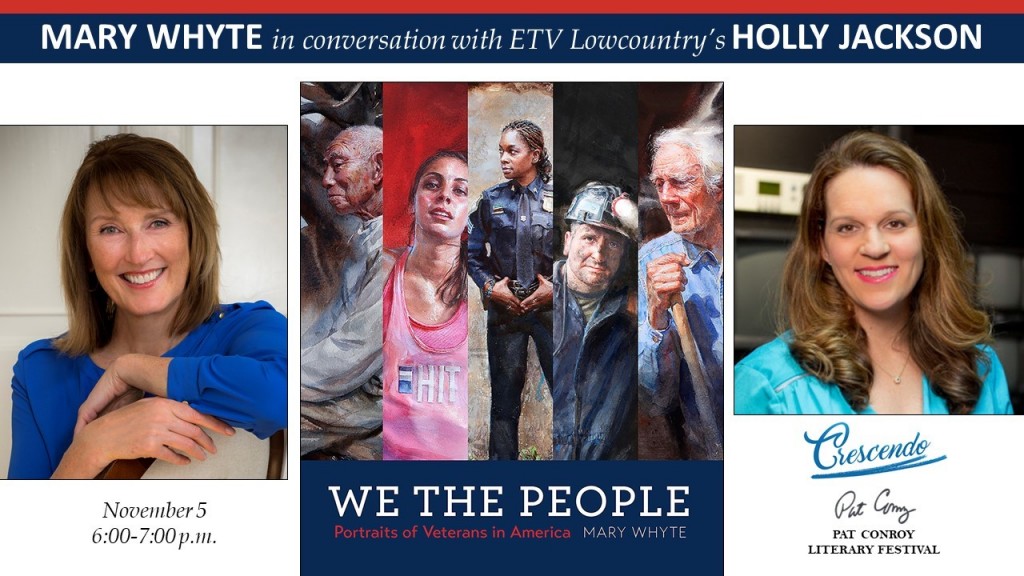 “Mary Whyte’s We the People is a moving and important tribute to our nation’s greatest patriots–the men and women who served our country with courage, selflessness, and honor.”–Major General James E. Livingston, Medal of Honor recipient

Whyte will be discussing her seventh book, We the People: Portraits of Veterans in America, which has been featured on CBS Sunday Morning and is also the subject of a nationally touring art exhibition. This special event will be held on Zoom, with free advance registration required. (A video recording will be posted to the Conroy Center’s Facebook page and YouTube channel thereafter.)

About We the People

We the people–these words embody the ethos of what it means to be an American citizen. As individuals we are a tapestry of colors and creeds; united we are a nation committed to preserving our hard-earned freedom. In this heart-stirring collection of watercolor portraits of military veterans–one from each of the fifty states–artist Mary Whyte captures this ethos as well as the dedication, responsibility, and courage it takes to fulfill that promise.

Those who raise their hands to serve may join for different reasons, but all–along with their families–make the extraordinary commitment to place the needs of the country before their own. Whyte gives us the opportunity to meet and to see some of them–to really see them. Whyte’s portrait of America includes individuals from many walks of life, some still active duty, and from every branch: women and men, old and young, and from a wide swath of ethnicities, befitting our glorious melting pot. From a mayor to an astronaut, from a teacher to a garbage collector, from a business entrepreneur to someone who is homeless, Whyte renders their unique and exceptional lives with great care and gentle brush strokes.

We the People is not only a tour across and through these vast United States, it is a tour through the heart and soul, the duty and the commitment of the people who protect not only our Constitution and our country but our very lives. We can only be deeply grateful, inspired, and humbled by all of them. All royalties will benefit the Patriot Art Foundation.

Mary Whyte is an American figurative artist known internationally for her watercolors of contemporary people. Her works are in private, corporate, university and public collections nationwide, and have been featured in numerous media outlets including CBS Sunday Morning, PBS and NPR. In 2013, Whyte was one of ten artists worldwide invited to travel to China and exhibit her watercolors at the Nanning Art Museum in Nanning, Guangxi.

The author of seven books, including most recently We the People: Portraits of Veterans in America, Whyte and her work have also been featured in many international publications, including periodicals and books in China, Russia, France, Germany, Canada and Taiwan. She is the recipient of numerous awards, including the Portrait Society of America’s Gold Medal, the Carolinas Freedom Foundation’s Freedom Award, and the Elizabeth O’Neill Verner Award, South Carolina’s highest honor in the arts. In 2019 Whyte founded the Patriot Art Foundation as a means to honor and inspire veterans through the arts. Learn more at www.marywhyte.com.

Holly Jackson is the director of content and operations at ETV Lowcountry in Beaufort, South Carolina. She is the host of the TELLY Award-winning By The River, a southern author interview program now in its third season. A graduate of the USC School of Journalism, Jackson also spent several years as a local television reporter in both Savannah and Tampa. With her husband Brian and their four daughters, she lives in Bluffton. Learn more at https://video.scetv.org/show/river.