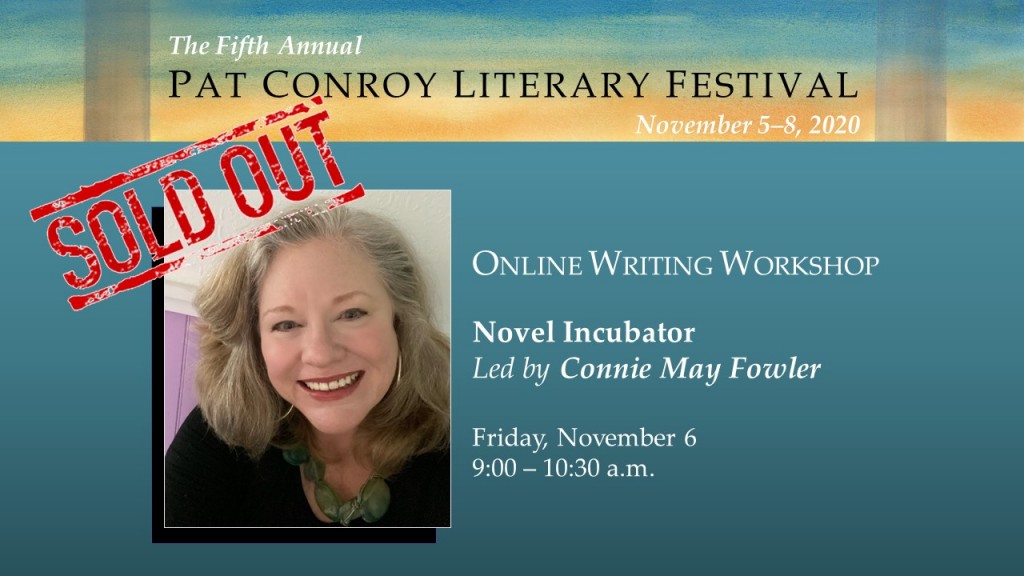 This workshop is now SOLD OUT! Thank you.

Ernest Hemingway said, “There is nothing to writing. All you do is sit down at a typewriter and bleed.” In this workshop, we’re going to take a different approach. Each participant will conceptualize and begin a concrete plan for writing a novel that will lead first sentences, first paragraphs, and beyond. We will focus on plot development, character development, place, voice, arc, motivation, point of view, and all the other myriad narrative pulses one must consider and nurture during the creative process.

Friday, November 6; 9:00-10:30 a.m. $60/person. Limited to 15 participants. This workshop will be held as an online video conference call through Zoom. Details for joining the video call will be provided to all participating writers after registering. Course materials will be provided as email attachments.

Connie May Fowler is a bestselling author of eight highly acclaimed books. Her latest, the memoir, A Million Fragile Bones, was published to critical acclaim in April 2017 and was a finalist for the 2018 Clara Johnson Award in Women’s Literature. Her novels include How Clarissa Burden Learned to Fly, The Problem with Murmur Lee, Remembering Blue (recipient of the Chautauqua South Literary Award), Before Women had Wings (recipient of the 1996 Southern Book Critics Circle Award and the Francis Buck Award from the League of American Pen Women), River of Hidden Dreams (recipient of a Florida Individual Artist Grant), and Sugar Cage.

She has published one previous memoir, When Katie Wakes, a book that explores domestic violence and its generational echoes. Three of her novels have been Dublin International Literary Award nominees. She adapted Before Women had Wings for Oprah Winfrey. The result was an Emmy-winning film. Her essays have been published in The New York Times, London Times, International Herald Tribune, Japan Times, The Sun Magazine, Oxford American, Best Life, and elsewhere.

Connie has written extensively about the environment, family violence, multi-cultural identity, poverty, women’s issues, and sumo wrestling. Much of her fiction contains elements of magical realism and offers historical, sociological, and environmental perspectives of the American South. For two years she wrote “Savoring Florida,” a culinary and culture column for FORUM, a publication of the Florida Humanities Council.

Her essays and stories have been widely anthologized in the United States and abroad. From 1997-2003 she directed the Connie May Fowler Women Wings Foundation, an organization that was dedicated to aiding women and children in need. From 2003-2007 she served as the Irving Bacheller Professor of Creative Writing at Rollins College and directed their award-winning visiting author series Winter With the Writers. She is the founder of Below Sea Level: Full Immersion Workshops for Serious Writers, The St. Augustine Writers Conference, The Yucatan Writing Conference, and directs the VCFA Novel Retreat. She lives with her husband and pet menagerie in Mexico and the United States.